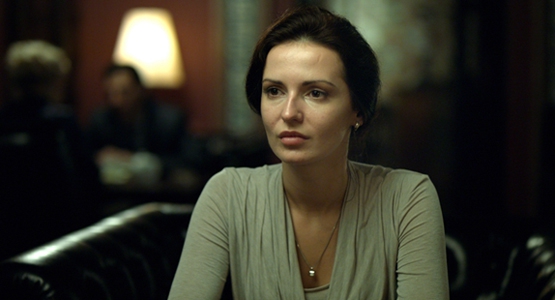 Why did you decide to take part in Experiment 5IVE? What attracted you to the project?

Producer Artem Vassiliev called me up and invited me to participate in Experiment 5IVE. I’ve known Artem for a while and have a lot of respect for him. Though my previous experience with short metier was pretty sad, I decided to hear Artem out. I was attracted by the fact that the conditions of the project allowed me an absolute freedom. The only necessary and common-to-all-films element was the short sequence in the beginning of the story and the object – the black envelope. The rest of it – complete creative freedom. In addition, we were just finishing work on a new feature film, "Elena," and so could take on Experiment 5IVE. So, actually, it was a combination of two freedoms: one of time and one of creativity.

Why do you call work on the "New York, I Love You" a bad experience?

I had to "with blood," figuratively speaking, defend 30 seconds of the movie, despite the fact that formally I had no right to it. Under the terms of the contract the final editing decision belonged to the producer. Fortunately, in the end, there was a normal, comprehend-the-director producer, and after months of active correspondence I was able to defend those seconds.

Are there any tools that allow you to tell a full fledged story in a short film?

In many ways, Experiment 5IVE is my attempt to explore it once again. Based on  my experience with "New York" I realized that five minutes is a very short time to tell a story. When you're not limited by time, when you don’t have to rush, you can afford a detailed exposition. For a film to begin to affect the viewer suggestively, to draw him into its space, some span of time is necessary. Five minutes seems to be a format better suited for a sketch or a joke, but it seems to me that in those five minutes we were able to say something more than what could be expected for a sketch.

Did you share your ideas with the other directors involved in Experiment 5IVE?

No, none of us knew what the others were doing. Whether or not this was the condition of the project, I didn’t ask what others are shooting, and they didn’t share with me either.On the set of “New York, I Love You” this was spelled out in the contract. I remember I had to find an actress for the first segment, the introduction, where she asks direction to the apartments of [Joseph] Brodsky. I decided to use some of the actresses involved in the filming of other segments. Since seeing a photo wouldn’t do, I was stealthily showed several seconds shot by other directors. That was the only way to see how the person “exists”, understand who she is.

Did you use any special effects in your movie?

I don’t use this technique very often, although in the "The Banishment" there was a scene where we added a lot on the computer. In the short for Experiment 5IVE I also used a special effect: the Polaroid immediately “fades” in the hands of the hero. Though this one wasn’t a digital, but a man-made special effect: first on the set we filmed the developing Polariod shot for a minute, then in post-production sped it up many times and reversed it. As a result, for four seconds you watch an image dissolve, but what you see is a real chemical process and not a computer-aided, virtual disappearance.

I prefer a movie that makes me think, impresses me with its uncompromising look at man and his relations with the world. Film that aims to once again try to solve this riddle: what is man? But I can, and with the great pleasure, too, derive an exclusively aesthetic satisfaction from watching a film. For example, I am very happy to have seen "Oceans," made by the same crew that made ??"The Birds" - it is a stunner.