This article was originally published in Italian for Rivista Studio and was translated to English by the author. 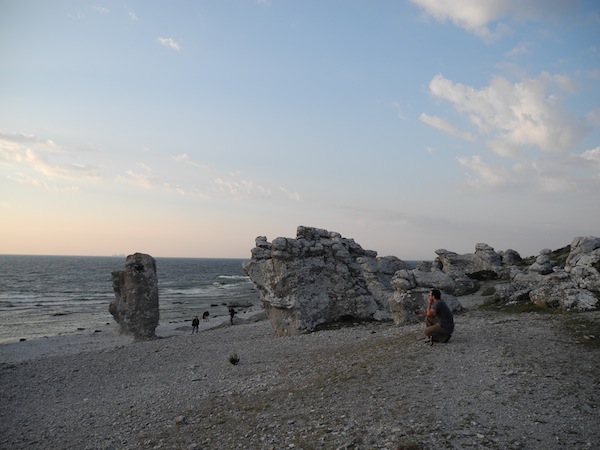 "…The taxi eventually brought us to the stacks on the island’s north side. We stood resting against the storm and stared tearfully on these secretive, godlike images that stretched their heavy foreheads against the waves and the darkening horizon […]. At this point I’m actually not sure what happened. If you want to be solemn, you could say that I had found my landscape, my true home. If you want to be funny, you could talk about love at first sight…"

This is how Ingmar Bergman described his first visit to Fårö in his 1987 memoir Laterna Magica. When scouting a location for Through a Glass Darkly in 1960, he tried for months to convince the Swedish production company to shoot on the Orkney Islands in northernScotland. He wanted a bleak, cold, and rough environment by the sea, and, after having flown around the entire Swedish coast in a helicopter, he was convinced he’d never find anything like that in his homeland. That was until he reached theisland ofGotland, and a small island off its northern tip called Fårö.

Located in the center of the Baltic Sea, halfway between Sweden, Russia, and the Baltic countries, Fårö is like no other place in Sweden. Its deep pine forests, limestone excavations, and famous stacks create remarkable scenery in the winter, while its sandy lagoons and crystal clear water make it a paradise in the summer. After completing the film later on that following summer, Bergman made the decision to move to Fårö to live for the rest of his life. He built a house close to where he had made Through A Glass Darkly and in the decade that followed came to make some of the most legendary films there, as well, including Persona in 1966, Shame in 1968, and Scenes from a Marriage in 1973. Since then, Bergman has inspired countless other artists who have come here after him, including Andrey Tarkovsky and his The Sacrifice in 1986, and a number of Swedish directors who regularly shoot here today.

Since2004, aweek-long festival has been held on Fårö each year to honor Bergman and his work. With screenings, lectures, international speakers, and some very special events, such as viewings in Bergman’s private cinema and the incredible Bergman Safari, one can get a small glimpse into his everyday life and work. Besides the usual information that you always pick up in biographies or documentaries, this can include rare, personal stories from locals living on the island and friends with whom Bergman used to work. One such story tells how Bergman at the end of his life had had his cast made to look like the Pope’s; or, how he would explain his fascination for working on TV dramas as being more like "fucking", while producing films was more like "making love". In short, it’s a remarkable week in a truly magical place.

Among this year’s speakers were director István Szábo, Lars von Trier’s cinematographer and photographer Manuel Alberto Claro, and Russian director Andrey Zvaganitsev, director of Il Ritorno, which won the Golden Lion in Venice in 2003; The Banishment, nominated for the Palm d’Or in 2007; and more recently, Elena, which won the Special Jury Prize in Cannes last year, and is debuting in New York this week.

I couldn’t wait to meet Zvaganitsev. Having picked up a pirated copy of  Il Ritorno during a high school trip to Rome in 2004 and having loved it deeply ever since, I consider Zvaganitsev to be one of the greatest modern directors. And besides admiring the distinctive style he has come to develop, I’ve always been intrigued by some of his very close resemblances to Bergman, as well: the reoccurring portrayals of weak, cowardly fathers; the strict usage of shadowless, natural light; and the lack of references to location or time, which deepens the mystique so perfectly in his first two films. Then one night, at last, after Il Ritorno was shown in an old, barn-turned-cinema, which had been built in the 1950s and still had its original movie posters on the walls, we were able to sit down and talk about his movies, his actors and his love for adventures – L’ Avventura! 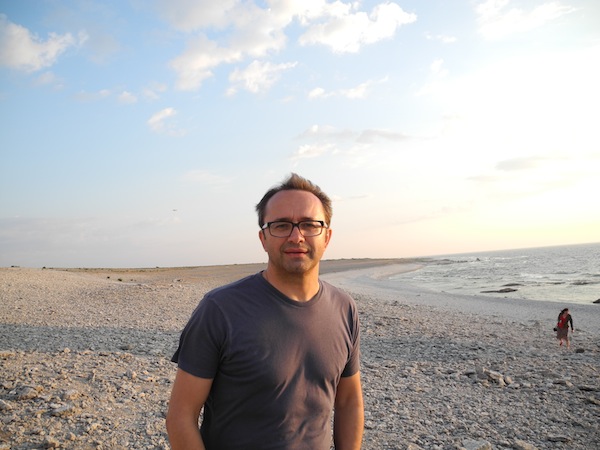 As we walked out of the cinema together, and while I was still deep in the vast mysticism surrounding Il Ritorno, Zvaganitsev immediately started describing the adventures he had had that day. It had been raining, and the car they were using for the week, Ingmar Bergman’s Volvo 240 from the 1970s, had barely made it back in the bad weather. He was driving as fast as he dared to make it to the cinema in time for his opening speech before Il Ritorno, but the non-working windshield wipers meant they couldn’t see a thing on the road and forced them to drive at a snail’s pace in fear of crashing the car. Though overwhelmed with excitement, he kept shouting "L’Avventura, L’Avventura, it was L’Avventura!" in his broken English. "It had been such an adventure!" Then, explaining how he had visited Bergman’s old house, he showed me a few photos he’d taken clandestinely with his iPhone: Bergman’s famous living room and reading chair, his study and work desk, and a remarkable original portrait of August Strindberg, painted by Edward Munch in the late 1800s. Further on, he explained that he was first introduced to Bergman’s films when he was seventeen and lived in Novosibirsk. When exiting the cinema after seeing Autumn Sonata, he realized that his shirt was soaked and realized that he had been crying the entire film. Without having to exaggerate, he was touched to be here.

Zvaganitsev is a man of patience. When making Il Ritorno, he personally met with 500 children before choosing the final child protagonists. It then took him three years to find Marie Bonnevie for The Banishment, and then another year of waiting for her to finish an ongoing project. After that, she "just" had to learn Russian… "She was such a hero. In the final scene, she does a four-minute crying monologue, all in one take. No breaks, no prompter, nothing. She was incredible". He explains that finding her was destiny. "I fell in love after seeing her in I am Dina, but was convinced that she was French and that she wouldn’t be able to do the role. Then, when I came to Sweden to receive an award for Il Ritorno, she was just about everywhere. On my first night we went to eat at a restaurant, and when I looked up from my seat I saw that a portrait of her was hanging over my head. Then, at the awards show the next day, I saw her entering the crowd. As she came closer to my row, I said to myself, "if she sits left or right of me I will drop the whole thing, but if she sits in front of me then it must be faith, then we shall work together". And… she did!" Without a doubt, his patience was rewarded. Bonnevie was unanimously hailed for her contribution to the film, while her counterpart Konstantin Lovronenko, who also played the protagonist in Il Ritorno, was awarded Best Actor at Cannes.

Having studied and worked as an actor long before he started acting, Zvaganitsev knows how to work with his cast. "Actors are like children, you just have to give them a lot of love", he joked. Zvaganitsev also knows how to create breathtaking images. He has worked with cinematographer Mikhail Krichman on all three of his films, and each time the photography has been stunning. "For ‘Il Ritorno’ we started shooting in Vyborgnear Saint Petersburgand the Finnish border, and then we moved east towards Ladoga. But the budget was only $400,000 and we could not afford any special effects. It is all natural light and shooting". The Banishment is staged in a beautiful old house surrounded by deep yellow fields at the height of the summer’s harvest, with cuts to scenes in dark, dreary, industrial parts on the outskirts of a city. "We had the possibility of looking all overEurope…Sardinia,England, France … But I wasn’t happy until we came toCharleroi andMoldova", he explained. "I needed something that looked likeFresno and oldSan Francisco, like in the original script. I didn’t want to shoot inRussia and we couldn’t go over there to theU.S., so I guess we found a place somewhere in between", he said and laughed.

I’m curious to hear more about Elena, but Zvaganitsev is reluctant and explains, "When I see films I never want to hear anything else about it beforehand, and in the same way I don’t want to ruin it for you". I agree, but I try to find a way around it and begin talking more about light and setting. It works: "In one scene of Elena, we were able to find the ‘magic light’ for one of the final scenes in the film. This light was only there for a rough half hour, and in the scene the twelve characters take a ten-minute walk. When something went wrong, all the actors and the whole team didn’t just have to walk back the whole way, but the light would have been gone. It took some time to finish". 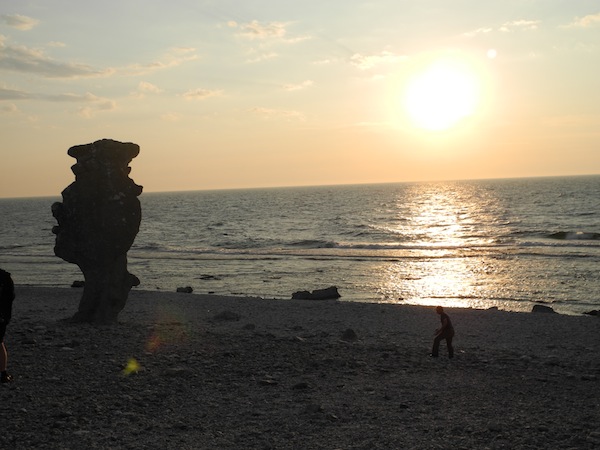 Elena is Zvaganitsev’s first film that is based in his current hometown ofMoscow. Described atCannes as "a drama between social classes", it takes place in the wealthy neighborhood of Ostozhenka and is the story of an elderly married couple. The husband, who is about to die, is from a very wealthy background, while the wife’s family is very poor. Zvaganitsev laughed and said, "It might be his first film that actually reaches any wider success in his homeland, it has just been picked up by a distributor that usually just works with films like "Terminator". Further on, he explained, "The film is aboutRussia today.Russia has changed, it is very dangerous now. People can come up to you and beat you up for no reason. And they won’t be punished for it".

Just as I was wanting to hear more about the "Russiaof today" and was desperate to get Zvaganitsev’s advice for the ultimate road trip throughRussia, a thunderstorm broke loose just above our heads. We rushed inside, and a few moments later the electricity blew. Though it had just passed midsummer and almost twenty-four hours of sunlight, it was almost pitch black outside and the waiter soon brought us some candles.

The rain kept hammering against the roof and every few minutes a flash of lighting blasted through the sky. Almost saddened, I understood that the night was over and that I probably wouldn’t be getting that travel advice after all. We were by far the only guests left in the restaurant and we needed to find a way home. I also realized that the last ferry was due to leave Fårö shortly, and being on foot, I really needed to find a way to the harbor immediately or I would be in for an adventure far sooner than I’d ever imagined.

The adventure did come, but in a way I never could have expected: Zvaganitsev and his kind translator offered to drive me to the ferry, in Ingmar Bergman’s old Volvo 242. I couldn’t believe it – his old car in this weather, without a doubt a true "L’Avventura"! We rushed through the rain and I jumped into the back seat. I immediately noticed that the car smelled just like those old, ’70s cars always do. It was magical. As we started driving through the woods, the last remaining windshield wiper battled it off in the storm. The car’s weak headlights barely made a difference in the pouring rain, but occasional bursts of lightning came to our aid and briefly lit up the sky. At 40 km/hour we made it just in time for the ferry. Although somewhat relieved, I still wish the drive had never ended. I could have ridden in that car all night.